Current we have stovetop (1), percolator (1), and moka (2). These are all different words for the same thing, and we should unify them into a single tag. So:

I call moka and percolator very different things; I think [moka] and [percolator] should remain separate and distinct.

Moka is what some call a stovetop espresso maker, which I think is a misnomer anyway. But it uses pressure to force water through grounds. Water goes through the grounds (which are in the middle of the device) once into a storage vessel on top, which is separate from the chamber in which the water was added at the beginning of the brew.

But I call percolator something that boils water and drips it over grounds repeatedly. There is no separate storage vessel for the coffee once brewed; water (at first) or (partially-brewed) coffee is repeatedly boiled and dripped over the grounds (which are instead at the top of the chamber). The brewed coffee ends up where the plain water was at the beginning of the brew.

I have both devices, and use them differently; e.g., a coarser grind for percolator. I find the outcome of percolated coffee to be more like French press or perhaps drip; moka is more like Turkish coffee or espresso. Though similar in concept, they're (to me) totally different in outcome.

Is this a regional terminology difference? Am I splitting hairs, or have I been doing this wrong all the years?? :)

I agree to drop "stovetop" as it's ambiguous.

I would suggest we use moka as the tag. Not only is it what the people who invented it call it, but it's the most popular term according to Google Trends: 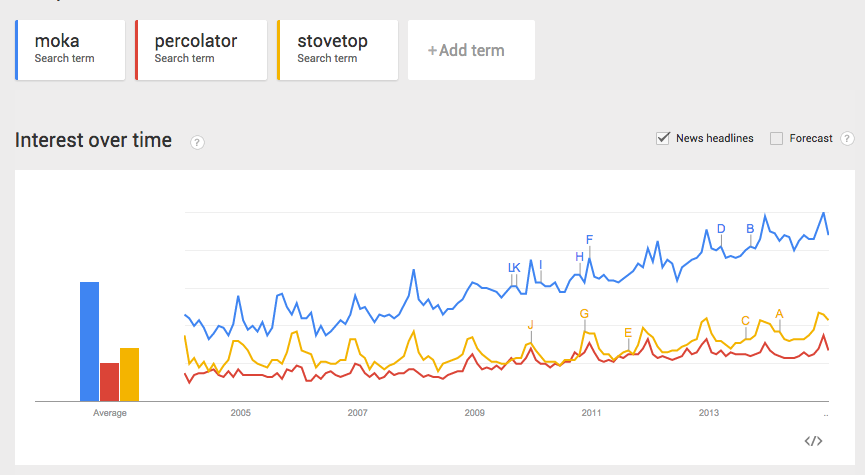 Not the answer you're looking for? Browse other questions tagged discussion tagging tag-synonyms .

This site is for discussion about Coffee Stack Exchange. You must have an account there to participate.

2
Potential tag synonyms: flavor, flavour, coffee-taste
4
Can tags contain the word 'coffee'?
4
Do we allow summary-like questions and answers?
5
Should we have Community Challenges?
3
Should this question be closed as too broad?
4
Are these two tags the same: equipment & coffee-machines?
1
How to deal with question that is essentially the same question but about a different model of coffee machine?